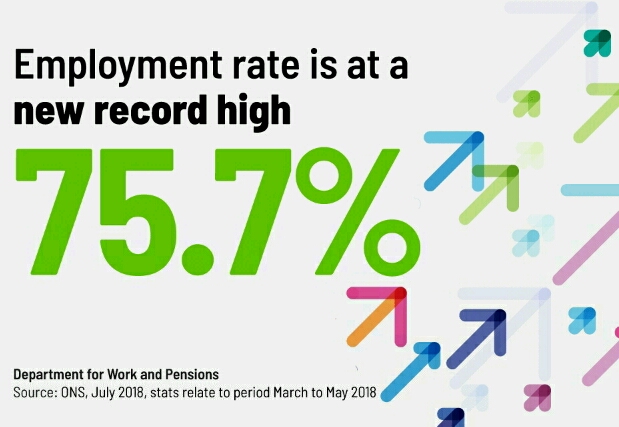 Newly released figures from The Office for National Statistics (ONS) show that the UK employment rate sits at an impressive 75.7%, a new record and the third highest in the G7...

The ONS numbers reveal that the majority of this employment growth has been in full-time and permanent roles - an important point to note given recent high-profile discussion (both positive and negative) around the 'gig economy'.

There is good news too for the more mature among us with the number of workers aged 50 and over remaining at its record high of 10.18 million.

There are also reasons to be cheerful for those looking to change job or career - with the current number of vacancies standing at over 800,000, the market is buoyant and opportunities abound.

Drilling down a little into the ONS figures, it becomes clear that there are significant numbers of vacancies in certain specific sectors. Top of the tree for opportunities at present are:

A clearly delighted Secretary of State for Work and Pensions, Esther McVey, enthused: "The employment rate is now at a record high of 75.7%, with over 3.3 million more people in work since 2010. The 8-year trend shows the vast majority of roles are in full-time, permanent work that’s higher skilled – which means higher paid too."

Graham Brown, Managing Director of Forces Recruitment Services Ltd, welcomed the positive numbers coming out of the ONS and issued a rallying call to employers looking to recruit the best people in the current labour market:

“That the nation’s employment rate continues to rise is clearly cause for celebration – strong figures in this area are a fairly reliable barometer for the direction in which the economy is headed. However, competition for talent is fierce and employers need to up their game.

“Now more than ever, recruiters need to look at the ex-military candidate market, where they will find a sizeable group of top professionals, with unparalleled experience and world class training. The plurality, variety and transferability of military skills can have a hugely positive impact on a civilian workplace.”