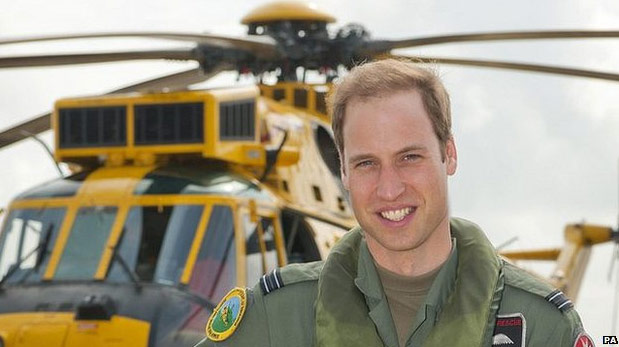 Following the end of Prince William's active service as an RAF search and rescue pilot, it has been confirmed that next spring he will be joining the civilian East Anglian Air Ambulance (EAAA). This could be an influential step adding to those already taken by Lance Corporal Rory Mackenzie and Prince Harry in their work towards highlighting the qualities and skills offered by ex-Servicemen and women to the civilian workplace.

At the Paralympics Closing Ceremony in London 2012 Lance Corporal Rory Mackenzie, who suffered a near fatal injury resulting in the loss of a leg, spoke of his optimism, strength and determination to keep going when he thought all was lost. He learnt to walk again and competed in an adaptive skiing programme, going on to row 3000 miles for charity as part of a team. Lance Corporal Rory Mackenzie, who is now a motivational speaker, served in the British Army for nine years and is living proof that regardless of background, able-bodied or injured, ex-service personnel have an abundance of skills to offer any workplace.

The next big step forward was on the 6th March, 2014 when Prince Harry, who we know is also ex-military, launched a new international sporting event for wounded, injured and sick service personnel called the Invictus Games. The event in September will mark the beginning of a legacy programme to support accessibility of adaptive sport and, most significantly further employment opportunities for transitioning Servicemen and women leaving the Armed Forces.

In July this year we shared with you the news about Jaguar Land Rover launching a new training scheme to help tackle high unemployment among former service personnel and, as large organisations such as Nissan and Port of Tyne have also employed many ex-Service personnel, it is clear that businesses are now recognising the depth of skill and knowledge that ex-forces personnel can bring to their organisation.

Not only will the Duke of Cambridge be the first member of the Royal Family in direct succession to the throne to sign an employment contract with a civilian employer (Bond Air Services), news of his civilian employment will also continue to strengthen the message to civilian employers everywhere that employing ex-forces personnel can be of huge benefit to their business.

They are after all ‘Britain’s Best Trained Workforce.’

If you’re looking for skilled and experienced personnel in Engineering, Logistics, HR, Project Management, Accounts, Administration or general management roles, we have candidates with the skills associated with those roles and are happy to help you.