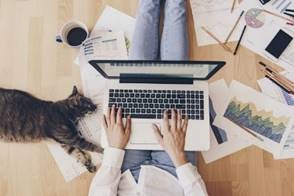 Does Lockdown Impact Productivity And Motivation?

The productivity of 67 per cent of the UK’s workforce is being impacted by working from home and the coronavirus, concludes a new poll for a report for Onecom, the UK’s largest independent business telecommunications provider...

With millions still working from home, the study investigated the impact of the virus and remote working on businesses and surveyed 1,000 workers at UK small and medium sized businesses who have worked from home since the lockdown was announced.

Despite the change in levels of productivity, the study also found that 83 per cent of the sample are using technology more often than they were before. Use of emails, telephone, video conferencing, social media and web-based research tasks have all increased since the lockdown. Around 1 in 4 are also using social media for personal reasons more often during the workday.

“While there is a significant minority who feel less productive because of working from home, 56 per cent have actually seen no impact or a positive effect" said Helen Myers, Onecom’s Operations Director. "What this means in practice is that working from home has a splintering effect on the productivity of workforces, with most benefiting or seeing no difference and a minority of people struggling with the lack of face time or not being in the office.

"Identifying and managing that minority presents a challenge for managers, however the findings of this report really highlight how important it is for work teams to continue utilising technology to stay in touch – not just via email, but also through video and audio conferencing too.”