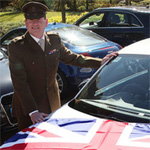 The Ministry of Defence has launched a new programme that could save members of the armed forces and their families thousands of pounds on the price of a new car.

DDS Cars, launched officially today, is part of the Defence Discount Service scheme which started in October 2012 and will help members of the forces, veterans and families save up to £7,170 on the price of a new car. The MOD says that the average saving will be £3,250.

Defence Minister Anna Soubry said: “It is excellent news that so many organisations have signed up to show their support for our armed forces and veterans.

“The Defence Discount Service is a great example of ways to help armed forces families by offering money off everyday items or more significant items like a new family car.

“I hope to see even more companies around the country signing up to the Defence Discount Service to show their support for our armed forces community.”

The Defence Discount Service offers discounts from more than 2,500 companies.

RT @XForces: Today it’s #NationalFitnessDay – shout out to all of the fitness & health businesses we’ve helped to support! Have you been ex…