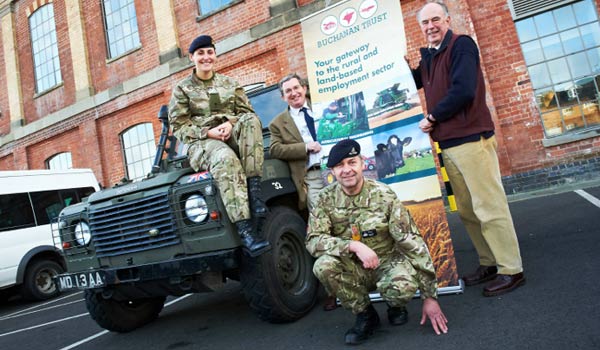 Buchanan Trust's Next Steps As Part Of Modernisation Drive

A military-focused charitable trust which supports ex-service personnel interested in making a living within the agricultural industry, has taken its latest step forward as part of its ambitious modernisation plans.

The Buchanan Trust was set up in 1918 by benefactor Robert Buchanan who gifted 800 acres of farmland on his estate in Bosbury, near Hereford, in memory of his son Alan, who died in battle near Ypres, Belgium, in June 1915.

Just over 12 months ago the Trust launched a successful consultation as part of modernisation plans which aim to ensure it provides wider opportunities for serving and ex-service personnel with an interest in rural land-based employment.

The proposals, which are currently awaiting approval from the Charity Commission, have now been showcased by the Trust to a large number service leavers and other personnel at a recent Ministry of Defence ‘Living and Working Fair’ held at Worcester’s TA Centre.

Buchanan Trust board member, Col John Marsham (ret.) said the exhibition, the first of many for the charity, has played a key role as a ‘research event’ and believes it has boosted the Herefordshire charity’s profile further.

He said: “The recent fair in Worcester was organised by the 143 Brigade and saw a large number of service leavers, their spouses and veterans attending to obtain information from over 40 exhibitors.

“The main focus for us was to advise ex-service personnel who are actively looking for a new career or to resettle in the West Midlands area.

“But aside from giving advice we were also able to tell people about the Buchanan Trust’s new direction and how its bright future will now hopefully benefit many more ex-service personnel on a national scale, especially with plans to cut service personnel by a third.

“The feedback we collated through a short questionnaire was overwhelmingly positive and we’d like to thank the 143 Brigade for their support.”

As part of the radical proposals the Trust has expressed its wish to increase its benevolence outside of its historic Herefordshire roots with a proposal to acquire land near to a yet-to-be-named military town for ex-service and serving personnel to use as allotments.

Col Marsham added: “Our consultation concluded in March and has driven a variety of radical proposals. It’s all part of our quest to broaden the benefits we can deliver to a greatly increased number of potential beneficiaries.

“Our future plans also include a possible educational and training partnership with a fellow military charity and an agricultural college to launch a programme of ‘taster’ training courses.”