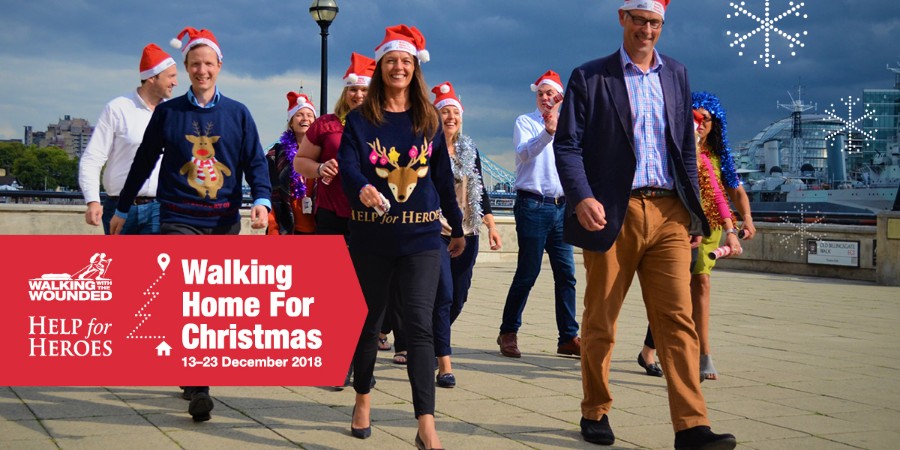 Joining Forces To Give Hope To Veterans This Christmas

Leading military charities Walking With The Wounded and Help for Heroes are to join forces this winter to support hundreds more veterans and their families who may be struggling at Christmas...

Earlier this year HRH Duke Of Sussex announced that more collaboration was needed within the military sector to provide better support for the Armed Forces and veteran communities.

WWTW and Help for Heroes, who have been working together delivering recovery programmes since 2012 are honouring Prince Harry’s vision by collaborating even further via a joint fundraising campaign, Walking Home For Christmas to pay for vital support for veterans at risk, including those who are unemployed or struggling with their mental health.

The British fashion and homeware retailer Matalan was announced as the headline sponsor of the fun walking challenge, Walking Home for Christmas, and hopes to encourage the nation to lace up their boots and organise a fundraising walk in their community. With over 200 stores nationwide and a loyal customer base who are active supporters of our nation’s wounded veterans the partnership is a natural fit for Matalan’s customers.

Participants can register for the walk online for free and upon registration will receive a Santa hat in the post. Between 13 – 23 December, registered friends and colleagues will walk the walk of their choice, wearing the hats, to raise awareness and money for those who served.

The campaign is now in its fifth year and has so far raised more than £1m for those who served and are in need of support. The longest walk to date was by a grandmother in Suffolk walking 400 miles to visit a family member in Northern Ireland in honour of her serving grandson. Other walks have included people carrying their Christmas tree home, collecting a turkey from a farm on foot and getting old regimental colleagues back together for a walk.

Walking With The Wounded CEO, Ed Parker said: “Both our organisations are helping the same person. We help them in different ways. We reach them in different ways. But essentially the veterans and their families are the people we’re all supporting. We really hope that people can come together on this and make it a huge success. We think that by working together we can make Walking Home For Christmas bigger, better and raise even more money.”

Help for Heroes CEO, Mel Waters said: “It makes absolute sense that while we work on recovery together we also fundraise together. It’s something that we’re proud to do given the nature of our partnership. We know that social isolation can become an issue, particularly if you don’t have a family at Christmas time. You can feel really removed from society and often need a little bit more support. We want to make a difference together and I really hope the public get behind this.”

Jason Hargreaves, Matalan’s CEO said: “Matalan is proud to be sponsoring such an important event and collaboration. The point of, Walking Home for Christmas is not just raising funds for an amazing cause, which is important - but also bringing communities together and supporting individuals at a very tough time of the year. It’s important we recognise that and remind people that support is available and that as communities we can be there for each other. That’s why we’re honoured to be title sponsors of this year’s event.”

FRS will be joining the walk - will you? You can do so here.