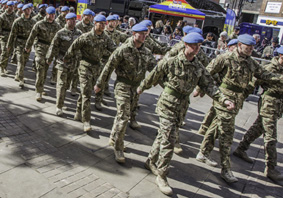 What Does The Armed Forces Covenant Mean For Communities?

Community covenants complement, at a local level, the Armed Forces Covenant, which outlines the moral obligation between the nation, the government and the armed forces...

Local authorities and the armed forces community are encouraged to work together to establish a covenant in their area in order to:

Covenants in each community may look quite different from one location to another. This is a scheme where one size does not fit all, and the nature of the support offered will be determined by both need and capacity.

Many local authorities have an ‘Armed Forces Champion’. The role of a ‘champion’ is often to make sure that the local authority achieves its commitments to the armed forces community and any blockages are resolved.

Some of the benefits to the service community from covenants created in their local communities include: