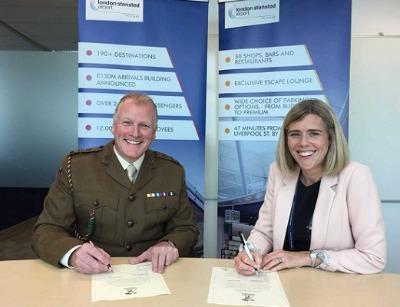 London Stansted has become the first airport in England to sign up to the Armed Forces Covenant outlining how it will support both serving and retired military personnel and reservists.

At a special event at Stansted Airport, the Covenant was signed by the airport’s HR Director, Liz Austin, and witnessed by Lt Colonel Dawber, who was representing the armed forces.

Liz Austin, Stansted Airport’s HR Director, said: “We’re proud and delighted to be the first airport in England to sign up to the Covenant. With our close proximity to Colchester Garrison and Carver Barracks we would like to increase the number of ex-military personnel working at Stansted to demonstrate our commitment to being an armed-forces friendly airport. Members of the armed services can bring real value to businesses like Stansted Airport and we recognise our duty to support those individuals who fulfill difficult roles across the world and return to civilian life.”

Kristina Carrington, Regional Employer Engagement Director at the Ministry Of Defence, said, “This is a great way for employers to highlight to their customers and the community that they support the Armed Forces. I invite every employer to get in touch to emulate London Stansted in publicly declaring their support for the military community.”

Over 12,000 people work at Stansted and there are a number of former service personnel and reservists working in various roles across the airport. Robin Challacombe, who lives in Saffron Walden, was an Army captain for nine years and is now Stansted’s Engineering Operations Manager. He said, “Upon arriving at Stansted I immediately saw and experienced the similarities of working at the airport compared to that of the military. There are many different departments doing a great job at their specific tasks but all working towards the same goal which ultimately unites them. There is an ethos at the airport of always trying your best and helping others out, just as there is in the military.”

Former RAF aircraft engineer, Russell Wide, who lives in Hempstead near Saffron Walden, is now employed as a project manager at the airport. He said, “Working in the RAF for 22 years gave me the can do attitude that is required in a fast paced operational environment like an airport. You’ll never be bored and often you’ll be stretched beyond your comfort zone.”

Jim Holland, Stansted Airport’s Head of Passenger Services, served in the Royal Navy for 13 years, said, “Spending time in the Royal Navy really prepped me for airport life, on many fronts. Working in a high security environment, no two days are the same, the challenges, the people, the camaraderie, and getting things done at a fast pace. Just like the forces Stansted Airport really is a rewarding place to work, the culture aligns with both service values and beliefs and is a fantastic place to meet great people.”

Signing the covenant means that you are supporting your employees as reservists and veterans.

By becoming a forces friendly employer you can benefit from the wide range of unique skills and experiences that reservists and veterans can bring to your organisation. Employing armed forces community members can help diversify the talent in your workforce. You can find out more about being a forces friendly employer. Additionally, if you would like to discuss how FRS can help your business recruit ex-military personnel contact our office headquarters.