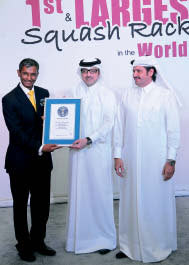 Pravin has just completed his first adjudication which took place in Doha, Qatar as the Qatar Squash Federation set the world record for the largest squash racquet, measuring 6.8 metres in length and 2.15 metres in width.

The 71.2kg racquet was unveiled during the opening ceremony of the PSA World Championship.

World No.2 Nick Matthew of England who was present during the unveiling ceremony said the world’s largest racquet launched in Qatar is yet another good thing to happen for the sport in recent weeks.

“It is always great to see people using unique ways to promote the game. We cannot compete with football, so it is a great idea to promote the sport” said Matthew, after the Guinness World Records official handed over the certificate to the QSF President Nabeel Ali bin Ali.

Guinness World Records official Patel said there was no existing record for the world biggest racquet in tennis or squash.

“This was a first record of this kind and the criteria had to be set by the Guinness World Records. The criteria for the record, was that the racquet had to be ten times the minimum size of a normal squash racquet in terms of height and width and had to be constructed in the same type of material.”

He added: “And that was set, and it is a record. Fibreglass, wood and aluminium material has been used and the same technique has been used in the making of the racquet,” said Patel.

QSF announced that the record was set thanks to the sponsorship backing from the Ali Bin Ali Group.

“As a passionate supporter of QSF and as an organisation dedicated to developing the game the Ali Bin Ali Group confirms that the backing of this world record is a testament of their unwavering commitment to squash,” stated a press release from QSF.

Pravin is currently back in Doha, this time adjudicating for the largest money box!