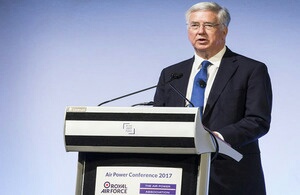 RAF Opens Close Combat Role To Women Ahead Of Schedule

Defence Secretary Sir Michael Fallon has announced that from September this year, ground close combat roles in the RAF Regiment will be open to women...

Speaking at the annual RAF Air Power Conference in London, Sir Michael praised the opening up of close combat roles to women, ahead of schedule, as a defining moment in the RAF’s history. The opening of the RAF Regiment to women means that from September 2017, every trade and branch in the RAF will be open to all genders.

The RAF Regiment is the Air Force’s ground fighting force, protecting RAF bases, aircraft and equipment at home and abroad.

Announcing the opening of the RAF Regiment to women, Defence Secretary Sir Michael Fallon said: "A diverse force is a more operationally effective force. So I’m delighted that the RAF Regiment will be open to recruitment to women from September. Individuals who are capable of meeting the standards for the regiment will be given the opportunity to serve, regardless of their gender. This is a defining moment for the RAF, as it becomes the first service to have every trade and branch open to both genders."

In July of last year the Prime Minister and Defence Secretary announced that all three services would open up recruitment to ground close combat roles to women.

The RAF Regiment was due to open its recruitment to women by the end of 2018, at the same time as the Infantry and Royal Marines. However the opportunity to invite women to recruit into the Regiment earlier than expected has become available due to a review of work practices which concluded that the Regiment was closer to the Royal Armoured Corps, which is already admitting women into their training ranks, in terms of risks.

Chief of the Air Staff, Air Chief Marshal Sir Stephen Hillier said: "The RAF is committed to providing equal opportunity to all, so it’s fantastic to be able to open recruitment to the RAF Regiment to women ahead of schedule. We want the best and most talented individuals to join the Air Force, regardless of their gender, race, or background. A diverse force is a more effective force, and we need the best people to deliver the important work we do, be it defeating Daesh in Iraq and Syria, or protecting Britain’s skies."