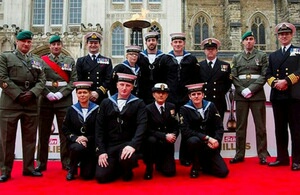 Nominations are now open for The Sun Military Awards 2017 - members of the Armed Forces and the general public have until 3 Sept to put forward individuals and units for an award...

The awards were first held at Hampton Court Palace in 2008 and the 10th ceremony will take place for the first time at the historic Banqueting House, in Whitehall in Central London. The star-studded evening will be an opportunity for the public to recognise some of the excellent work and outstanding achievements of our Service personnel over the last year both overseas on operations and across the UK.

Over the years, the Millies have been attended by HRH The Prince of Wales and The Duchess of Cornwall, The Duke and Duchess of Cambridge and Prince Harry, along with senior politicians and celebrities from the worlds of entertainment and sport.

Following the success of a number of new award categories in 2016, the Millies will again include the Inspiring Others Award – honouring individuals in the Services and Cadet Forces who have inspired others to achieve more through their awe-inspiring example.

The Award organisers are also asking for nominations in the Innovation Award category, which recognises firms or individuals who have developed game-changing or life-saving pieces of equipment. Last year’s winner was Trauma Simulation Ltd, a firm backed by the MOD that developed realistic, life-size models to help surgeons train on battle-casualty injuries.

Last year’s winner in the Hero at Home category was Sgt Adam Threlfall, Airborne Delivery Wing, who provided vital first aid to two fellow parachutists who became entangled in an uncontrolled descent, and Best Reservist Lieutenant Ruairi Holohan, who was honoured for helping migrants rescued from the Mediterranean by HMS Bulwark.

Defence Secretary Sir Michael Fallon said: "The Millies are a fantastic opportunity to demonstrate to the nation why we have the best Armed Forces in the world and show our heartfelt appreciation for all that they do. I would like to thank The Sun for hosting this event for the last 10 years to recognise the outstanding achievements of our brave Servicemen and women who help keep this country safe."

Chief of the Defence Staff Air Chief Marshal Sir Stuart Peach said: "Be it individuals or units, Reservists or Regulars, heroic acts or overcoming personal adversity, developing life-saving technology or inspiring others in their local community, this is your chance to nominate the Servicemen and women of the Armed Forces who serve on your behalf every day."

An awards ceremony will be held at Banqueting House, Westminster on 13 December. Do you know of an individual or unit that has performed with distinction between 1 Sept 2016 and 31 Aug 2017? This is your opportunity to give them the credit they deserve by visiting The Sun’s website