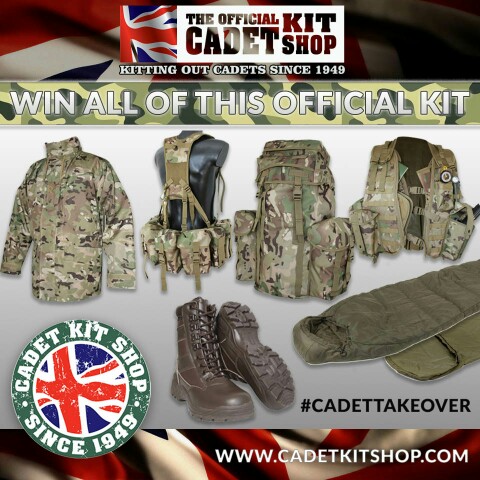 Win £500 Worth Of Kit By Joining The BFBS Cadet Takeover!

And now it’s getting competitive as every video is in with a chance of winning £500 worth of kit from The Cadet Kit Shop. Entries are open now until Friday 1st September 2017, when the winning video will be chosen by the Forces Radio BFBS judges.

The short films are published with the #CadetTakeover hashtag online on the www.forces.net website and Forces Radio BFBS’s social media channels.

Hundreds of air cadets have already taken part, and Air Commodore Dawn McCafferty, Commandant ATC, has supported the initiative with a video that’s been viewed more than 50,000 times on Facebook.

The BFBS Cadet Takeover aims to raise the profile of local units and its members, illustrate the benefits of joining a cadet force, and foster inter-unit competition. This also brings ownership of a key part of our radio and digital content and develops the digital skills of young people. Examples of videos could include parades, cadet tutorials, or ‘How To’ guides.

Tips for shooting videos and details of how to send them to Forces Radio BFBS are available online. Before submitting a video, cadets must obtain authorisation from local unit officers and parental consent.

The Cadet Unit Consent Agreement form, the BFBS Cadet Takeover Competition Supplementary Rules, and a pdf link with the full competition prize, are all available online at: http://forces.net/radio/join-bfbs-cadettakeover