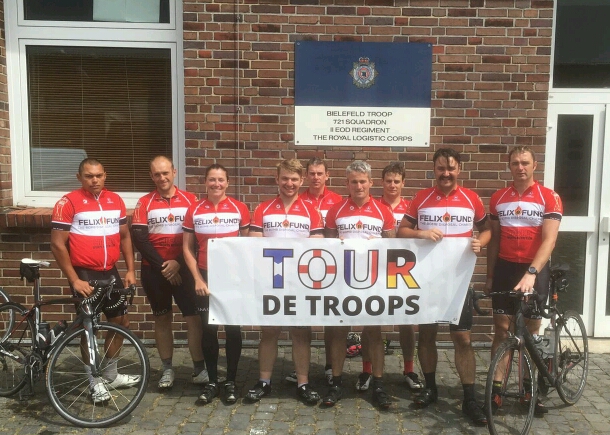 Travelling just by bike, the Tour de Troops set out from Edinburgh on 27th May, where they cycled for an average of 100 miles per day, before arriving in Bielefield, Germany on 11th June.

The event, sponsored by Kirintec - a security technology company, saw the determined cyclists from the British Army swap blast suits for Lycra, raising money for the Felix Fund, a charity which helps those affected by Explosive Ordnance Disposal (EOD).

The Lord Provost of Edinburgh, Frank Ross, helped launch the charity cycle, saying: "Day in and day out, these men and women risk their own lives as bomb disposal experts, working in highly dangerous circumstances to keep the rest of us safe. This is their down time, yet they have chosen to spend it raising thousands to help others. Each and every one of these cyclists is an inspiration. It has been an honour to set them on their way.”

The team made their way to England, France and finished up in Germany, passing through many towns and cities close to their military bases along the way.

Kirintec also offered their support with Stephen Jakeman, Senior Software Engineer, joining in cycling the 56-mile leg from Ashchurch to Didcot. Stephen said: “As an organisation, we couldn’t have been prouder to sponsor such a fantastic cause and it was a pleasure to join the cyclists. Recent events demonstrate the vital role that EOD operators and equipment have in our industry. Individuals put their lives on the line every day, mostly without the public knowing. I implore you to dig deep and donate what you can to Felix Fund”

Melanie Moughton, Chief Executive Officer at Felix Fund, said: “We can’t overstate the strength of this cycling team and the significance of this tour to our charity. They’re all people of exceptional ability and courage and have undertaken a huge challenge for a charity that is close to their hearts.

One of the cyclists, Captain Wadsworth, was integral to organising the event. He said: “The tour was no mean feat. The troops resilience throughout the tour was admirable. Thank you to friends, family and spectators who provided support and motivation along the way."

Felix Fund's charity activities also provide essential mental health support. They have played a significant part in the care of over 100 EOD teams returning from the Afghanistan conflict and the charity now offers Dashboard Courses on mindfulness which helps to build awareness of the warning signs linked to mental health problems and sharing coping techniques.

Every member of the Tour de Troops cycling team belongs to the 11 EOD Regiment RLC (Royal Logistic Corps). If you'd like to support the charity's work, you can donate via their JustGiving page