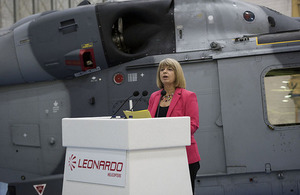 Defence Research And Innovation In Practice

Defence’s contribution to the UK economy was on show as Defence Minister Harriett Baldwin visited the south west to hear how Ministry of Defence (MOD) research and industrial partnerships are supporting UK jobs, exports, and capability...

Mrs Baldwin visited Yeovil to mark a year of the innovative Strategic Partnering Arrangement between Leonardo Helicopters and the MOD. The Arrangement was signed in July 2016 and lays out shared commitments to cost effectiveness, jobs, and exports, recognising the key role both parties play in building national prosperity through exports, sustaining employment and specialist skills, and supporting small and medium enterprises (SMEs) in the supply chain.

Over the course of a year, the MOD has placed millions of pounds worth of contracts with Leonardo, supporting hundreds of jobs, boosting exports, and driving technological innovation. In January 2017 the MOD signed a £271 million five-year deal with Leonardo to support the UK’s world-leading Wildcat helicopters, safeguarding hundreds of UK jobs.

Most recently, in June 2017, the MOD announced a £260 million contract to supply the UK’s Armed Forces with the next generation of secure Identify Friend or Foe technology. The work will sustain around 150 jobs at Leonardo’s sites in Luton, the West of England, Edinburgh and across the wider UK supply chain.

Minister for Defence Procurement Harriett Baldwin added: "Our Strategic Partnering Arrangement with Leonardo is a fantastic example of the contribution that Defence makes to the UK economy: creating hundreds of jobs, attracting millions in investment, and boosting UK exports across the world. Backed by our rising defence budget and strategic engagement on exports, we are determined to deliver the high-wage, high-skills jobs of the future, making the UK one of the most competitive places in the world to innovate, build business and help deliver security."

During her visit, Mrs Baldwin was briefed on the progress being made on the second phase of a jointly-funded £8 million Rotary Wing Unmanned Air System (RWUAS) concept demonstrator; cross-Government efforts to support the export of the Wildcat AW159 and Merlin AW101 helicopters; and company plans for continuous improvement and to underpin design engineering capabilities that are vital to ensuring safety and airworthiness.

Leonardo Helicopters make a significant contribution to the economy in the South West and developing plans would see the site in Yeovil become the heart of an aerospace technology centre. The MOD anticipates spending some £3 billion with Leonardo Helicopters over the coming decade, with work on the future coordination of strategic exports between the UK Government and Italy being led by the Department for International Trade.