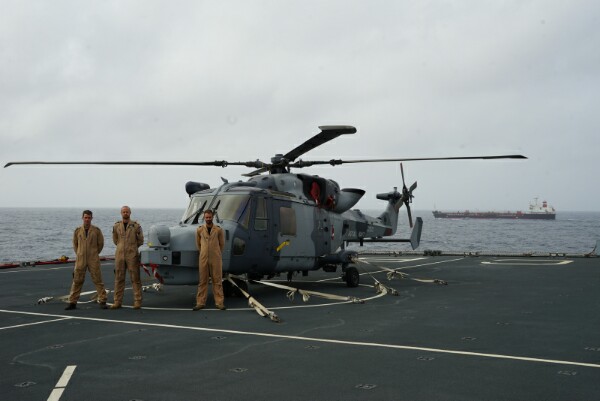 A Royal Navy air crew has rescued the last survivor of a sunken tanker in the Indian Ocean at the end of a dramatic international rescue which saved 13 lives...

Royal Navy Air Engineering Technician Stu Rogers was repeatedly swamped by waves as he spent half an hour trying to hook the stricken sailor and winch him up into HMS Monmouth's Wildcat helicopter, 140 miles off the island of Socotra in the Gulf of Yemen.

The sailor was the 13th of 14 crew members of the tanker Rama 2 which put out a Mayday call in the early hours of Monday as she was battered by heavy seas. Twelve of the crew were subsequently picked up by merchant vessels which took part in the rescue effort, directed by British naval authorities in Bahrain.

But two men were reported to be in the water, prompting Plymouth-based HMS Monmouth to launch her new Wildcat helicopter - call sign Black Jack. The helicopter was too far from the Rama 2's last position to perform an immediate rescue, but refuelled on another British naval vessel patrolling in the region, RFA Cardigan Bay, to continue - a technique known as 'lily-padding'.

With the help of the merchant vessels and a long-range Japanese patrol aircraft to direct the helicopter, Black Jack arrived on the scene as darkness was falling on. A flare marked the location of one of the two crew still in the water, but the weather was so poor, fuel was running low and light was fading that the rescue was right on the limit of what the helicopter and its crew are allowed to safely operate in.

At times waves engulfed both winchman and survivor, exhausting both men, but at the very last minute Stu connected the shipwrecked sailor to his winch wire and hauled him safely into the Wildcat.

"It was a difficult sortie. We were close to the wire but it was great that we were able to get him on board," said Stu. "A 30-minute attempt to get him hooked up was one of the hardest things I've had to do since joining the Fleet Air Arm."

Black Jack's Flight Commander, Lieutenant Ash Morgan added: "This rescue was tricky due to the time we had to transit after the 'lily-pad' on RFA Cardigan Bay and then looking for a sole survivor in open water with very choppy conditions."

With sadly no sign of the 14th man, Black Jack returned to Cardigan Bay on the cusp of sunset. The survivor was immediately checked by the Cardigan Bay's medical officer and assessed to be fit and well, but somewhat battered. It was estimated that he had been in the water since the Rama 2 sank earlier in the day. None of the tanker's crew had been able to get into life rafts because of the bad weather.

The 13 survivors were reunited aboard the merchant vessel Tortola, which had rescued ten of the crew, and taken to Salalah in Oman. Despite an extensive search, the missing 14th member of the crew was not found. He is presumed dead.

"The efforts of the crew of the Japanese patrol aircraft and the assisting merchant vessels were particularly humbling and I have no doubt that it was the combined efforts that resulted in a successful rescue," said Black Jack's pilot Lieutenant Si Hall.