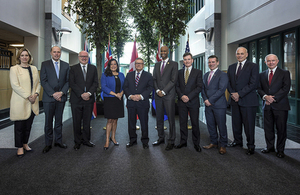 The Home Secretary has secured the support of the ‘Five Eyes’ members in urging communication service providers to do more in removing terrorist and violent extremist content online...

In a two day visit to Ottawa, Canada as part of a Five Country Ministerial, she joined her counter-parts from Australia, Canada, New Zealand and the US to take a united stand against international threats.

Ministers from the five countries put their name to a joint letter, tackling terrorist use of the internet welcoming an announcement from Facebook, Microsoft, Twitter and Google to begin forming a new global industry body but stressing that it is critical progress is made quickly.

The letter makes clear there should be no safe space for terrorists and extremists to communicate online their unlawful goals. Hateful content used to recruit and radicalise people should be removed faster as much of it is still freely accessible.

The cross country support for the letter comes after the Home Secretary held a roundtable in March with major internet providers to encourage them to prevent the dissemination of high quality propaganda. Now, these companies are working on an industry wide form that will share information, provide technical solutions and give support to small companies.

Home Secretary Amber Rudd said: "The issue of terrorism transcends borders and a truly global effort is needed to end the spread of hateful propaganda. The commitment from my fellow Five Eyes members to a shared approach to Communication Service Providers and their backing of the new industry forum is a vital step forward.

"In our darkest hours, the international community has stood together. The ties between our countries give us a strong foundation to end the spread of the poisonous propaganda used to recruit and radicalise people across the world. Today’s letter is a statement that our countries will never let terrorists win."