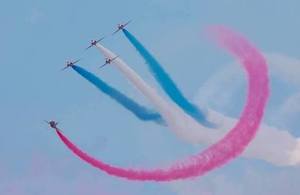 Defence Minister Earl Howe has announced that the tenth Armed Forces Day national event will take place in and around Llandudno in the borough of Conwy, North Wales...

The event in the historic seaside town will be supported by the Ministry of Defence, together with the Welsh Government and Conwy Borough Council.
The announcement comes as events are held across the UK to mark Armed Forces Day, including the national event this year hosted by the City of Liverpool.

Secretary of State for Wales Alun Cairns will join the First Sea Lord and thousands of people at the South Wales celebrations in Caerphilly to honour the work and dedication of our brave Servicemen and women deployed around the world.

Defence Minister for the Lords, Earl Howe said: "Llandudno represents a superb venue for next year’s celebrations and I’m sure the town will bring together the whole nation in celebrating our Armed Forces. Wales was the proud host of the national event in 2010 when thousands of people celebrated in Cardiff. The support from the Welsh Government and local communities, coupled with the rich and vibrant history of Llandudno, means that the town is the ideal choice to make the event even more successful in 2018."

Secretary of State for Wales Alun Cairns said: "I’m delighted that the national Armed Forces Day event will return to Wales in 2018. This time next year, we will see veterans of wars gone by and soldiers serving in conflicts around the world today marching side by side in Llandudno, united in pride in service to their country.

"In Wales we have a special connection with our Armed Forces and this annual event gives the public an opportunity to show their appreciation and pride for our soldiers, sailors and air personnel who sacrifice so much for others. Our debt of gratitude also extends to the families they leave behind and the veterans past and present who have dedicated years of their lives to service. I am honoured to mark Armed Forces Day today - and in the years to come - in their company."

Councillor Gareth Jones, Leader of Conwy County Borough Council, said: "We are proud and privileged to be named as the Host of the National Armed Forces Day in 2018. Conwy County has a deep affiliation with the Armed Forces and a strong historical link. Llandudno will be a great destination to showcase the outstanding work of the Armed Forces past and present.

"The event will be supported by all the North Wales Councils and key colleagues across Wales. Serving personnel and veterans of our Armed Forces Community will be assured of a very warm welcome and an event that thanks them for their commitment to keeping the country safe."

North Wales has many current and historic links to the Armed Forces, including and many Regular and Reserve Army units, including the Royal Welsh recruit from there. RAF Valley on Anglesey, is home to a fast jet training base. Nearly 10,000 veterans live in Conwy, supported by a number of local and national charities.