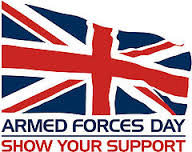 The ninth annual Armed Forces Day will centre on Liverpool, where regulars, reserves, their families and veterans will gather for a parade, receptions, displays, a ship visit and Red Arrows and Typhoon flypasts.

There will be hundreds more significant events to thank the UK’s forces, from Caerphilly to Plymouth to Edinburgh here and from the Falkland Islands to Cyprus overseas.

Ahead of attending today’s event in Liverpool, the Prime Minister said: “Our world-leading Armed Forces work day and night to defend our country and our way of life, both at home and abroad.

“In the aftermath of the Manchester attack, military personnel played a vital role on UK streets, providing visible reassurance to our communities. And further afield they continue to take the fight to Daesh in Iraq and Syria, helping to drive the terrorists back and give ordinary people in those countries the chance to rebuild their lives.

“I am proud to be attending the Armed Forces Day celebrations in the great city of Liverpool this year, joining thousands of people in expressing our gratitude to the men and women who do so much to preserve our freedom.”

Ahead of Liverpool’s event Defence Secretary Sir Michael Fallon announced that nearly 11,000 service personnel have been able to get on the housing ladder or change their home using Forces Help to Buy scheme payments. Since its launch in April 2014 more than £163m has been paid to scheme applicants, allowing service personnel and their families to borrow up to half their salary to buy their own home.

Defence Secretary Sir Michael Fallon said: “We owe a huge gratitude to the men and women of our Armed Forces and salute their service in keeping us safe each and every day. As we celebrate Armed Forces Day there are 10,000 regulars and reserve personnel serving now on NATO operations.

“The Help to Buy milestone demonstrates our promise to ensure that our Armed Forces and their families can enjoy the stability of owning their own home. It is part of our commitment to them in return for the immeasurable commitment they make to us.”

Today’s event in Liverpool will consist of a large-scale military parade from St George’s Hall to the Pier Head supported by bands. Reflecting Liverpool’s strong connection with the Royal Navy, the Type-23 frigate HMS Iron Duke will be docked in the city. In the air there will be flypasts by the Red Arrows, Typhoon and the Battle of Britain Memorial Flight. Military villages of static displays, machines and equipment will complete the show.

Liverpool’s Assistant Mayor and Cabinet Member for Culture, Tourism and Events, Councillor Wendy Simon, said: “It is a privilege to host Armed Forces Day and there is a real buzz about the city as we get closer to Saturday’s celebrations. We are a city renowned for its success when staging large, outdoor events and Saturday will be no exception. As the national focal point for Armed Forces Day we will make sure that when the spotlight shines on us, we will do all that we can to make the city, the armed forces and the UK proud.”

UK Armed Forces are currently involved in over 20 operations in more than 25 countries, from South Sudan to Iraq. Also present will be many veterans that make-up the estimated 2.56 million Armed Forces veteran community living in the UK. Young cadets will be present too; together the Sea, Army, and Air cadet forces have almost 100,000 members, many of whom will be at events up and down the country.