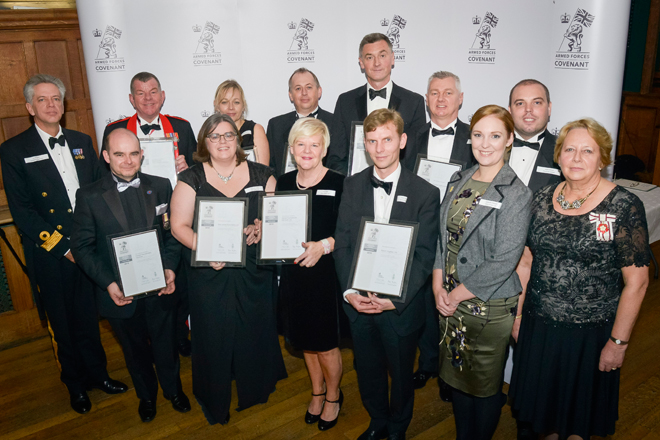 Forces Recruitment Services was delighted to receive a Silver Award under the MoD’s Employer Recognition Scheme at a prestigious ceremony on Monday night (14th November).

FRS joins a small group of employers to receive a Silver Award, highlighting the company's dedication and commitment to supporting ex-military personnel. Graham Brown (Managing Director) said, “This is a very proud moment in FRS’ 15 year history. The silver award is so widely recognised by candidates and employers now that it feels like the Oscar of our industry. The traits and skills of ex-military make them the very best employees and it’s a privilege to serve them.”

Pictured is Managing Director, Graham Brown and Operations Director, Adam Bonner receiving their award from Commodore Elford, and all the award winners for East Anglia.

The Defence Employer Recognition Scheme was launched by Prime Minister, David Cameron, in July 2014. The scheme encompasses bronze, silver and gold awards for organisations that pledge, demonstrate or advocate support to defence and the armed forces community, and align their values with the armed forces corporate covenant.