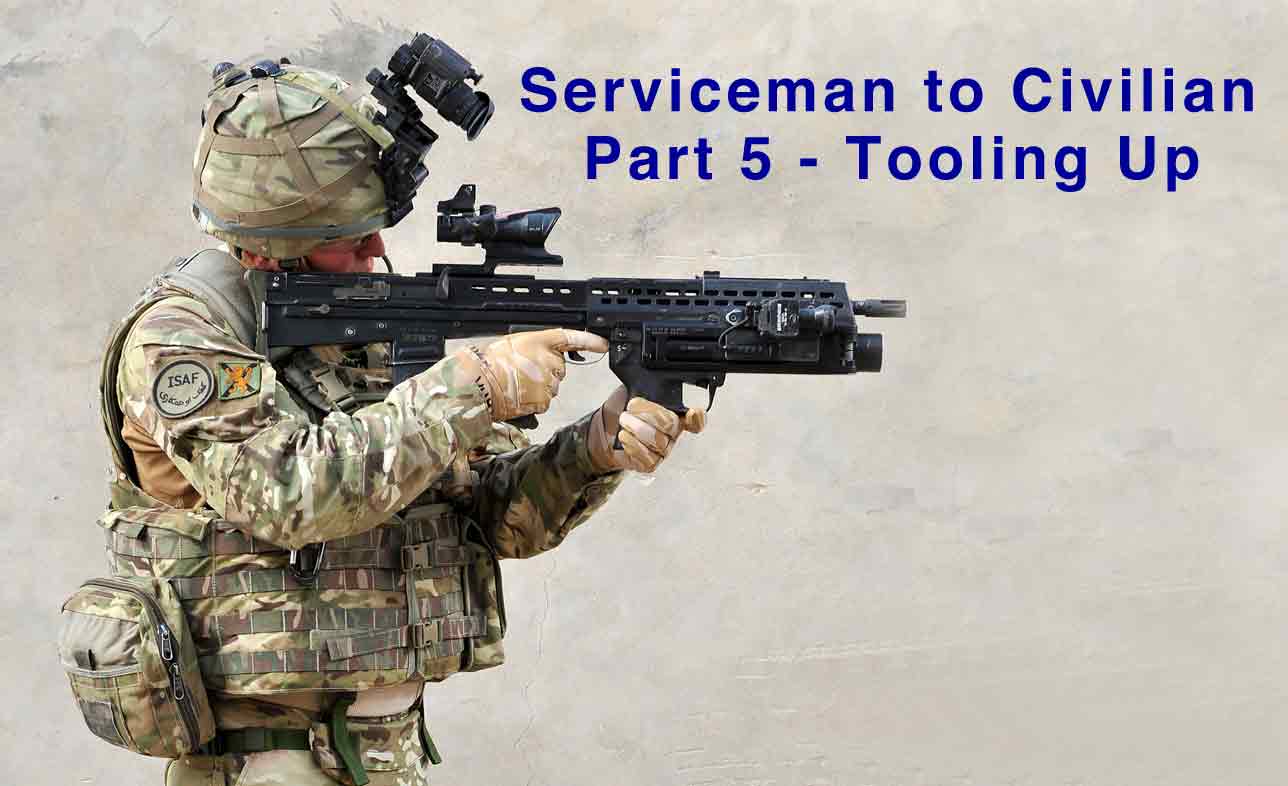 Serviceman to Civilian - Part 5: Tooling Up

Welcome to the fifth in the series of thought provoking blogs by Ben, in which he describes his resettlement journey after serving thirteen years in the British Army.

Now in his search for employment, Ben talks about his 'starter kit for resettlement!'

It has been over 13 years since I was last on the search for employment and back then I was merely a young teenager looking for an arbitrary job to put beer tokens in my pocket.  All I needed was a cheap suit, slick curtain-style hair and an application form I’d got from whichever fast food restaurant would let me apply.  It seemed to have worked pretty well back then considering from the age of 13 I haven’t had a single day of unemployment.

Today however, in the pursuit of an occupation worthy of succession of my military career, things are a little more complicated that the times of yester-decade.  The internet has expanded the employment forum, negating many of the traditional methods of getting a job, sometimes without even physical face-to-face interaction.  Mentally preparing for an interview is half the battle and the idea of putting a suit on, only to sit in front of my computer at home to be interviewed throws a huge curve ball into the equation.  Sure it has its advantages, but walking into an interview room, shaking someone’s hand and presenting yourself in front of them is half the battle.  I would need some tools to help me crack this resettlement malarkey.

Suits are lingerie for men and women! I own about 14 suits and it drives my wife crazy! The benefit of a good suit cannot be underestimated.  Not just the suit either; the whole package too. Ties, shoes, shirts, cuff links, even a tie pin, but I draw the line at sock suspenders!  Without this turning into a fashion blog, it is important to consider what you wear and what it says about you.  Obviously this is completely speculative to whatever occupation you are aiming for but some of the fundamentals will still apply. I wouldn’t for instance, turn up to an interview for a managerial position dressed in a shiny fashion suit with skinny tie and slip on shoes. Why? Because it instantly screams young, immature and more concerned about looking good in a suit that doing good in the suit. Consider things like the colour of your tie.  Red for example is considered a power tie and therefore can be considered domineering.  You will see many Presidents, Prime Ministers and politicians wearing red symbolising success, power and influence.  It’s all food for thought.

No, not the one of you with you drunkenly slumped over your mate after another successful round of beer pong which decorates your Facebook profile.  As I’m sure you’re aware, supplying a CV with a head-and-shoulder photograph is not really the norm these days due to discrimination legislation. It will inevitably come in handy when building an online presence like Linkedin. The exception to the rule is obvious for jobs which specifically require a certain look, such as actor, film artiste and such like.  Picture the images which you will have seen of the Company or Regimental Headquarters personnel board, but swap the MTP uniform for a suit. Dress in a suit and take a simple head-and-shoulder shot similar to a passport photo but turn slightly at an angle. A good camera and lighting will help but don’t be tempted to start applying Instagram filters to jazz it up!  Keep it simple and professional.

Wait, what?!  Why would I need a business card when I don’t even have a profession?!  I thought the same when someone gave me this advice too.  After toying with the idea for several weeks I took the plunge and invested about £10 in a set of business cards.  Nothing too adventurous – again just keeping it simple.  I put my name, email address, phone number and linkedin profile address. These would later come in very useful later down the line but I will elaborate on that in further blogs.

You’ve now probably got a picture in your mind of that black plastic rectangle one from the market stall seller in town for £14.99 right?!  That’s fine if you’re illegally trading uncut diamonds in a hotel room but for resettlement purposes, try and avoid it.  It might not be something you take into interview because let’s face it, apart from carrying a folder with a CV in it, the rest of the space is taken up with your lunch. It’s more for those occasions where you’ll visit an employment fair or networking event where you might receive lots of brochures or information packs and you need somewhere to put them. The last you want to do is crease your suit with a day sack slung over your shoulder. It doesn’t need to be an Armani pure Italian leather job, again, keep it simple and functional.

Got a pen? Of course you have; you always carry a pen! But if you’re anything like me, your handwriting changes drastically depending on what pen you use.  Some pens regress my handwriting style back to that of my primary school days and so when I’m handed a pen and paper to fill in my details, they’re going to later look at my writing and probably reconsider contacting me.  Find one which works for you can don’t go anywhere without it.

It’s not just limited pens though. Consider when you’re at an employment fair and someone asks you for a CV. You’ll reach into your briefcase; whip out a CV tailored to that company and job because you’re smart and researched them online before setting foot in the fair! But consider two things; the paper it’s printed on and what it’s presented in. As I mentioned in an earlier blog, I invested a few quid in some quality paper and presentation wallets to keep my CV in good condition and the pages together.  It is subtle things like that which will stick in someone’s memory when they review a pile of CV’s later. Jedi mind tricks!

So that is my starter kit for resettlement.  It shouldn’t cost an arm and leg but everything will have a use after you land that perfect job.  The list is by no means exhaustive, but things which I found have so far which have helped me present myself in a more professional modus.

Feel free to leave feedback and comments either on Ben's blog or you can follow him on Twitter @Serviceman2Civi.