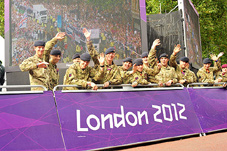 The Armed Forces have been honoured to take part in the 'Our Greatest Team' Parade in London on Monday 10 September.

Some 18,200 members of the British Armed Forces have supported the London 2012 Games, providing a whole range of land, maritime and air expertise.

At the Olympic and Paralympic venues, in conjunction with civilian agencies, millions of visitors have been processed and checked, military musicians have entertained the crowds and ceremonial duties including flag-raisings at victory ceremonies have been carried out.

In all, over 170 members of the Armed Forces acted as flag-bearers and flag-raisers for ceremonies at both the Olympic and Paralympic Games, taking part in over 100 'country welcome' ceremonies and 805 victory ceremonies.

Communities at locations across London and the rest of  the country have welcomed Service personnel into their midst and servicemen and women have taken great pride in supporting the Olympics, which they have done to the best of their ability, receiving an excellent response from members of the public.

During the parade, a Band of the Royal Marines played stirring British marches and a 12-strong Honour Guard from the 1st Battalion Irish Guards greeted the athletes as they arrived at the Queen Victoria Memorial outside Buckingham Palace accompanied by the Band of the Coldstream Guards.

600 men and women from the Armed Forces were among the welcoming crowds lining The Mall. In a grand finale the Royal Air Force Aerobatic Team, the Red Arrows, supported by formations of other RAF and Royal Navy aircraft, staged a flypast over Buckingham Palace. The flypast was preceded by British Airways aircraft 'The Dove' which flew the Olympic Flame from Athens into Royal Naval Air Station Culdrose.

Both serving members of the Armed Services and Forces veterans competed in the London 2012 Olympic and Paralympic Games.

These included Captain Heather Stanning, from the Royal Artillery, who clinched the first Team GB gold medal of the London 2012 Olympics with her rowing partner Helen Glover at Eton Dorney, and ex-RAF armourer Jon-Allan Butterworth who took three silver medals in the Paralympic cycling.

Service personnel also acted as officials and specialist supporters in a wide range of sports.