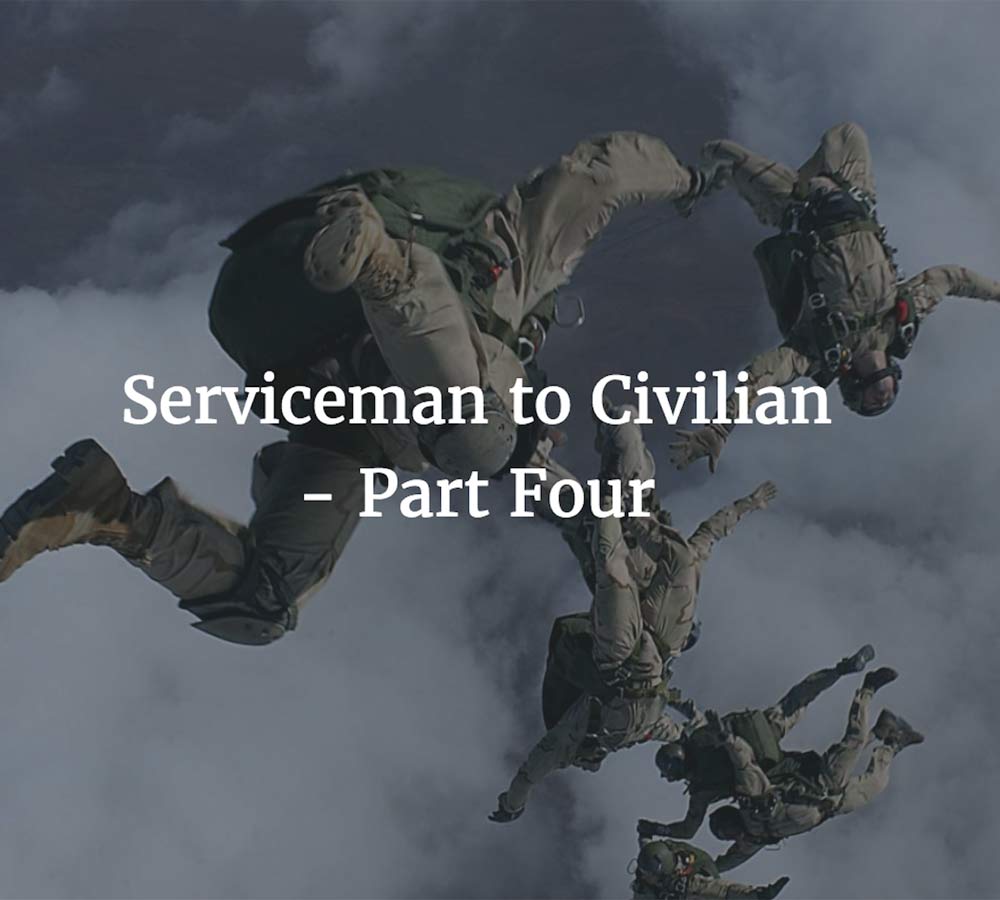 After thirteen years in the British Army, Ben is preparing to become one of over 14,000 skilled and experienced service members transitioning from the Armed Forces every year in the UK.

In this 4th of his series of blogs, Ben describes how his resettlement is beginning to effect him.

Resettlement is a time of a great uncertainty about your future career and life as a whole. Unsurprisingly, at some point most of us will go through the ‘fear’ phase; and not always over a singular period. It certainly wasn’t for me.

But what is it exactly that creates the fear within us? In essence, it’s the negative aspect of being in resettlement which creates the fear. That sudden realisation that life and everything we know is going to be thrown into turmoil. You may go through it very early on and the thought may never cross your mind again, but for others it can be a repeat process; I’m the latter. I tried to comprehend why it kept on coming back.  After all, I was genuinely enjoying resettlement and really looking forward to starting something entirely new.

It was the False Evidence that Appears Real – FEAR. Let me explain...

Before I had even started to contemplate terminating my service, several of my very close friends had already gone through the process.  This gave me the ideal knowledge base to form my resettlement 'Dos' and 'Don’ts' from.  Every opportunity I got, I weaned information from them in the pursuit of forming the perfect resettlement plan. This helped me to base my decision on before taking the plunge myself.  It was only after I had handed in my notice that the false evidence started to creep in.

It first hit me like a freight train when I attended my first employment fair in October; less than a month after I did the seven clicks of the mouse to terminate my army career.  I was sat in the reception of a leisure centre waiting to have my CV put through its paces by a professional CV writer. Someone sat down next me who I knew from a posting about 3 years previously and he himself had been out of the military for about 18 months.  When I asked him how he was getting on, he explained that he was struggling to find work and had done since leaving; to the extent that he had to sign onto unemployment benefits.  He warned me of a few pitfalls of his career choice, which I had been discussing not half an hour before with one of the exhibitors at the event.  Within 30 seconds, another former colleague happened to wander over and explain that he was in a similar predicament.  Imagine that; two former colleagues who I would class as having successful careers in the military, telling me that they are struggling and all within under a month of me making the same decision.  The fear began to grow.

Over the next few months, I started regularly speaking to my other friends who had also been out of the military for over a year.  I had more or less the same response from each of them. “You’ll have to start working for your money soon” they’d say. They would explain just how busy they are and how they’d bounced from job-to-job trying to find their calling.  Some had even contemplated re-enlisting back into the Armed Forces.  Nobody had categorically said that they regretted their decision but I could tell that they certainly had some second thoughts.  The fear continues to grow.

It also occurred to me quite early on in resettlement that some companies who hire former military personnel immediately judge you on your military rank.  I call these ‘Rankist Companies’ and you will generally find that they have a recruiter who has formally served and can ring-fence you into a certain level of employment.  One such organisation I had spoken to, categorically told me that I would not make the level I wanted as it was really only for those who had achieved the rank of Major.  Not based on ability, academic achievement or experience, but the fact that you had never spent time in a certain rank.  Yet if I were to apply as a civilian having never served, I would be welcome to apply for whatever position I felt the need to apply for.  Now without being completely naive to the fact that they are looking to suit the right person to the right job, it’s very demoralising to be categorised by a rank system of a completely different organisation.

All of these events had inadvertently and collectively formed the fear of the future and doubt of the decision I had made.

During a resettlement course, we examined a theory called Maslow’s Hierarchy of needs. Maslow theorised that every person has a number of basic needs to fulfil in life such as security, belonging and a sense of accomplishment to name but a few.  This summarises what we all want to achieve in life and in essence, we are trying to achieve during resettlement.  To find a secure job as quickly as possible,  which pays a wage in order to build a sustainable living and get back to the level of contentment that we enjoyed as part of our military career.  After all, for many years we all slept sound in the knowledge that we had a secure job with a sense of purpose and belonging, food on the table, a roof over our head and a few quid in our pocket.  It is all those things that during the resettlement period suddenly become uncertainties.  Not to dwell on this for too long, but it is these fundamentals in life that we all need to achieve.

All this had contributed to the generation of FEAR- False Evidence that Appears Real.  The friends who were struggling, the ring-fencing of potential and the uncertainty of future coupled with the stripping of things in life which I considered a surety.  It was only when I was discussing it with my wife that I came to this realisation.  The successful are successful, but we dwell on the negative.  You don’t see those personnel who have a job at the employment fairs because they are hard at work building their new lives.  They didn’t leave thinking that they still got a Wednesday sports afternoon, NAAFI breaks or late starts.  For whatever reason they chose to leave the Military, they knew that they would have to work hard and find something else that interests them enough to make them get up in the morning.  I was focussing on the few and disregarding the many.

It was time to accept that some feelings and fears we inevitable and the only way to overcome them was to work harder than I ever had before to achieve what I wanted to achieve.  If you fall off the horse you've got to get up, dust yourself off and get back on as quickly as possible.

Maslow’s theory image is courtesy of Wikipedia under the Creative Common Deed.

Next Blog: Part 5 - Tooling Up