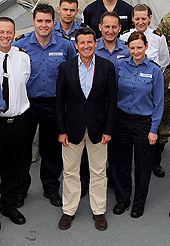 Sebastian Coe thanks the Armed Forces for their Olympic contribution

Lord Sebastian Coe paid a visit to HMS Bulwark in Dorset on 4 September, to meet some of the people involved in delivering security for the Olympic and Paralympic sailing venue during the 2012 Games.

On board the fleet flagship, Lord Coe, who is Chairman of the London Organising Committee of the Olympic and Paralympic Games (LOCOG), thanked Royal Navy personnel and LOCOG and Maritime and Coastguard Agency volunteers who supported Dorset Police's maritime security plan for the sailing venue in Weymouth Bay and Portland Harbour.

And, whilst on board, he took a tour of the Operations Room and admired the view from the bridge of the ship that currently overlooks Portland Harbour where the Paralympics sailors were competing for gold out on the water.

Escorted by the Maritime Force Commander and Commanding Officer of HMS Bulwark, Captain Alex Burton, who at the height of the Olympics in August was responsible for over 1,000 Royal Navy and Royal Marines personnel, he praised the contribution of the men and women who had shown such good spirit in keeping the Olympics and Paralympics safe.

He said: "I am delighted to meet representatives of the Royal Navy, Dorset Police and the Maritime and Coastguard Agency on board HMS Bulwark today."

"Everyone based here has had a valuable part to play in securing the Games," he continued. "It is clear that the co-operation between the military and civilian agencies here in Dorset has been outstanding throughout the Olympic Games and Paralympic Games and I offer my sincere thanks for providing a safe and secure sailing arena so the world's best sailors could deliver outstanding performances at sea."

Lord Coe took the time to talk with many representatives from each department on the ship. Captain Burton said: "It's great that Lord Coe came along to meet the team that delivered the maritime security at Weymouth. It means a lot to us all that the man who brought us the greatest sporting spectacular on earth was able to find time in his whirl of Olympics engagements to thank the team."