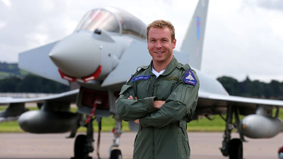 Olympic gold medallist Sir Chris Hoy was thrilled by a ride in an RAF Typhoon.

Six-time Olympic gold medallist Sir Chris Hoy experienced speed of a different kind with a flight in a Royal Air Force Typhoon multi-role combat aircraft of 6 Squadron during a visit to RAF Leuchars in Fife.

The main task for 6 Squadron and RAF Leuchars is to maintain a Quick Reaction Alert Force, with crews on standby 24-hours-a-day, 365-days-a-year to scramble and intercept unidentified aircraft approaching UK airspace. During the Olympic Games, Typhoon aircraft were based at RAF Northolt in West London on standby to provide air security.

"I am absolutely delighted to have had such a warm welcome to what is a very busy RAF station. Flying in the Typhoon was a really extraordinary experience and one I will never forget."

"What a day! A ride in a Typhoon fighter jet has to be one of the most spectacular experiences I've ever had. Thanks to all at RAF Leuchars! Everyone at RAF Leuchars was so friendly and helpful, thank you all for making the day so memorable."

"Our front line Typhoons are single-seat, multi-role aircraft but we have some twin-stick jets for training purposes and it was a pleasure to give one of our Olympic gold medal winners the opportunity to experience flying in the aircraft that has been providing air security throughout the London Games”.

"Just as Chris has a backroom staff who ensure that he and his bike are in perfect shape to win gold, as a pilot I am reliant on my RAF colleagues, from the engineering bays to the air traffic control tower, to ensure that I and my aircraft are primed to deliver our mission - defending the UK skies.

Of the support the Armed Forces gave to the Olympic and Paralympic games Sir Chris said, “I am full of admiration for the skills these guys have”.