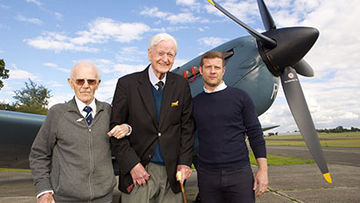 Today (15th September 2015), the 75th anniversary of Battle of Britain Day, an estimated 40 Spitfires and Hurricanes from across the UK, USA and Europe will come together at the Boultbee Flight Academy, the world’s only Spitfire Flying School to take part in an historic flypast over the South of England.

With behind the scenes access to the build-up and exclusive aerial coverage of the flypast, this show will bring breathtaking coverage of this unique spectacle.

The event brings together more Spitfires and Hurricanes in one place than at any time since World War Two - all converging on Goodwood Aerodrome in West Sussex. The roar of 40 Spitfires and Hurricanes starting their engines will transport the airfield back in time to the Battle of Britain, when it was known as RAF Westhampnett and home to two fighter squadrons that fought in the campaign.

Nothing like this will have been seen since the War – and presenter Dermot O’Leary will hear the emotional memories of the veterans who have come to witness it. For these last surviving members of ‘The Few’, the flypast will be a unique way to celebrate a major anniversary of the Battle of Britain. One of them, 95-year-old Tom Neil, will even be taking part with a nostalgic flight in a Spitfire. Dermot will also meet the two wounded servicemen who have trained under the Spitfire Scholarship to fly the iconic aircraft.

Using helicopters and a chase plane, the show will capture all the action as the Spitfires and Hurricanes form ‘Wings’ of up to eight aircraft and embark on routes covering the South of England. It will be a truly dramatic and emotional spectacle as they pass over iconic locations connected with the Battle of Britain, such as the White Cliffs of Dover, Biggin Hill and RAF Uxbridge.

The show will feature full and exclusive access behind the scenes and the key factors in pulling off the event, including the flight briefing, air traffic control and the choreography of the aircraft on the ground.

Dermot will also explore the extraordinary passion these planes inspire. 98-year-old ATA girl Mary Ellis will be reunited with Spitfire MV154, which she delivered during the War, whilst American aviation enthusiast John Sessions will explain how he had his Spitfire dismantled and shipped over from Seattle so it can take its place in the flypast.

As soon as the planes from the flypast land back at Goodwood, Dermot will capture the emotional reactions of the pilots and passengers as they reflect on an historic flight and how this day 75 years ago changed the course of the War.

These films tell an extraordinary story of triumph over adversity – with the epic, once in a lifetime flypast forming a fitting tribute to some of the World’s bravest aviators. Executive producers are Tom Brisley and Ash Potterton, series producer is Chris Parkin and Dermot O’Leary is Associate Producer.

Tom Brisley, Joint Creative Director Arrow Media, says: “We’re delighted to be working with Dermot again on Battle of Britain, another landmark production for Channel 4. Following the success of Live from Space, the Battle of Britain production will feature a must-see event, as we bring to life one of the most significant days of World War Two.”