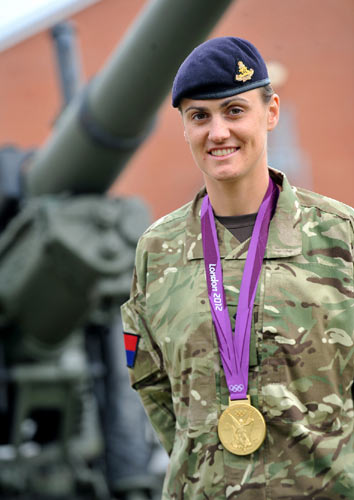 She and rowing partner Helen Glover won rowing gold in the Olympic final of the Women's Coxless Pairs.

In a dominant performance, the world championship silver medallists raced into an early lead in the 2,000-metre race at Eton Dorney Lake, beating the reigning world champions New Zealand and the twice defending champion Romanian pair by a comfortable margin.

After crossing the line, the pair embraced and waved to the sell-out crowd of 30,000 spectators including Princes William and Harry who had been cheering the pair to victory. The crowd were buoyant at seeing Britain's first Olympic gold medal champions crowned at a home Games.

Speaking after the race on BBC1, an overjoyed Heather Stanning, a Captain in the Royal Artillery, said:

"I'm absolutely shattered and want to collapse but I also want to jump up and down. I'm excited and absolutely ecstatic all at the same time. I'm just so overjoyed."

During their post-match interview, the BBC played a message from Afghanistan where troops cheered the women's victory, delighted that one of their Army family had claimed one of sport's ultimate triumphs. Captain Stanning thanked them for their support and said that she looked forward to seeing friends and colleagues when they returned home.

At the medal ceremony, the pair fought back tears as they stepped up on the podium to claim the first ever Olympic gold for Britain in women's rowing.

The daughter of Navy officers, Captain Stanning believes the military lifestyle was hardwired into her as a child, making it, along with the attraction of adventure training and opportunity for sport, a natural career choice. She was commissioned from Sandhurst in 2008 before joining 32 Regiment Royal Artillery.

Then, two years ago, she was released from Army duties so she could attempt to row her way into Olympic history. Speaking to Defence Focus in June, Captain Stanning said:

"The Army have been absolutely fantastic at supporting me and giving me time off while it has clearly been a busy time."

Captain Stanning credits her Army training with helping her keep a clear head and to stick to her goals:

"What I learned in Sandhurst was that you're given your mission and you stick to it," she said.

Captain Stanning reflected on the prospect of Olympic glory and what it would mean to the Army:

"Hopefully," she said, "seeing an officer achieve something on the world stage will inspire other soldiers. And part of our performance will be a way of saying thank you to 32 Regiment Royal Artillery."

Captain Stanning will return to Army duties in September with the unique distinction of an Olympic gold medal hanging around her neck.